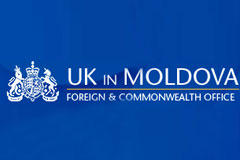 Q: Your Excellency, how do you see the relationship between the Republic of Moldova and the United Kingdom, and how is London viewing it in a nearest perspective?

A: The UK has been a consistently strong supporter of Moldova’s conflict settlement and EU integration efforts. Over the last 5 years, the UK has provided Moldova with around Â£1,800,000 worth of bilateral projects, utilizing various UK Foreign & Commonwealth Office (FCO) funds. These projects have helped the Moldovan Government tackle corruption and organized crime, strengthen public administration, and facilitate export of Moldovan goods to EU markets. Funds have also been channeled through various NGOs to support freedom of the media, conflict resolution, promoting democratic values and building the capacity of Moldovan civil society organisations.

The Department for International Development (DFID), the UK Government department responsible for promoting sustainable development and reducing poverty, is also present in Moldova funding an entire range of projects that address issues internationally agreed in the Millennium Development Goals (MDGs).

Q: What are the future plans of the UK for deepening its relationship with Moldova? What are the specific areas that the UK is going to focus on?

Q: What do you think Moldova should do on its path to European integration?

A: It is a very complicated question; I think clearly the EU-Moldova Action Plan set out the initial steps, necessary steps that Moldova should take as part of moving towards European Union. The future contractual relationship between European Union and Moldova, once that contractual relationship is finalized, it will set up an additional number of actions and steps that Moldova will be required to meet to be ever closer to the EU.

But I think it is important to recognize that those actions cover a range of areas, and we are not just talking about economic or business areas, we are talking about a number of other areas such as justice, legal reform, home affairs, tackling corruption, there is a whole range of areas that Moldova will have to work on to move ever closer to European Union, towards EU standards.

Q: What areas are those companies working in?

A: They are looking at a number of areas. IT is one area that British companies are interested in. British companies have realized that there are in Moldova very highly skilled, very competent, very IT literate segments of the work force, so clearly there is a commercial attraction for these companies in tapping into that expertise.

Q: What is the position of the UK Government regarding the relationship between Moldova and Transnistria?

A: UK position is a simple one. The UK supports the established negotiation framework 5+2, and any progress towards the settlement should be conducted within the 5+2 framework.

Q: How do you assess the efforts on behalf of Moldova towards a Transnistrian settlement?

A: Given the very nature of the positions of Chisinau and Tiraspol, it will never be a speedy process; it is going to be a long process. What we see is that Moldova has taken a number of very positive steps. Moldova has on a number of occasions expressed its willingness to do more, to participate in the various specialist working groups, which allows to take the work forward. The Ministry of Reintegration has been very supportive of the work that the British embassy has taken forward, such as ”Transnistrian Dialogs” project or the recent conference in Odessa. So yes, I think that there is much Chisinau has done, which has been positive, which has been constructive.

Q: During the conference in Odessa experts expressed a view that the Transnistrian settlement can be achieved with specific steps in the economic sphere. What do you think of that?

A: I think dialog between Chisinau and Tiraspol takes place on a number of levels. There is a high level, the 5+2 framework, but that does not preclude contacts and work being done at lower levels, and in a number of areas. Establishing a dialog in a economic, commercial areas is also very important, because we cant see any of those strands in isolation from each other, they are all interconnected. Dialog in one area comes to support dialog and confidence building in other areas, and it all contributes to an overall package.

Q: Who do you think benefits from the current situation that exists between Chisinau and Tiraspol?

A: Clearly there is a big number of people who lose because of the current situation between Chisinau and Tiraspol. You asked me earlier about polarization of the society. As long as the Transnistrian issue remains unsolved, you will continue to have entire generations who will grow up in a divided society, in that sense of the term, so again the future generations do not benefit. But in answer to your question, who does benefit, it is actually hard to say, the only people who benefit, I suspect, are a small number of people who continue to look back to the past instead of looking into the future, where Moldovas future prosperity lies.

Q: Do you think that the events in April led to a polarization of the society?

A: What we saw around the 6-7 of April was regrettable. I understand that in any elections there will be some people who are not happy with the outcome, but there are legal processes, democratic processes, by which they can register their concern. A place to register those concerns is not in the violence that we saw on the streets on 6 and 7th. The dialog between the government and the opposition parties is very important. It is important that they maintain that dialog, which will help not to polarize the society.

Infotag: Thank you ever so much for the interview, Your Excellency.

Infotags note: In 1Q2009, Moldova exported US$11.9 million worth of good to Great Britain și up US$3 million against the equivalent period of last year. Moldovas imports from the UK fell down to US$10.2 million against US$14.8 million the year before.