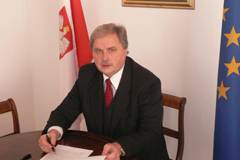 Q: Your Excellency, how would you assess the level of cooperation between Poland and Moldova now that you are completing your diplomatic mission to this republic?

A: This past November 15, we marked the 15th anniversary of the Agreement on Friendship and Cooperation between Poland and Moldova. Those were very fruitful years that brought our people closer to one another and strengthened cooperation between our state institutions. We maintained contacts on the levels of our presidents, governments, ministries as well as citizens. In previous years, Poland used to be visited annually by over 20 thousand Moldova citizens. However, after Poland had acceded to the Schengen Zone and introduced paid visas, the number of visitors from Moldova has shrunk appreciably. In 2008, for example, we issued only about 8 thousand entry visas. This year, the figure will hopefully not fall.

Q: Could you describe the main directions of your diplomatic mission in Moldova, please?

A: First and foremost, an ambassador is supposed to preserve and further develop political relations between two countries concerned and, certainly, direct relations between central state institutions. I guess these objectives have been achieved. Furthermore, five years ago the Poland-Moldova trade turnover did not exceed US$74 million, and in 2008 it reached US$300 million. Moldova is an excellent partner to Polish people of business, as can be seen from the activities of more than 1.2 thousand Polish corporations supplying their products onto the Moldovan market. And over 200 companies export Moldova-made goods onto the Polish market. I guess the deficit Moldova currently has in its trade with Poland can be reduced by means of improving the advertising of Moldovan goods.

Q: What can Poland recommend Moldova on its way towards European integration?

A: There exist a number of recommendations that were formulated in the European Commissions recent report. But I would like to highlight only several aspects. In the European Union, we come across different interests of EU member states. To Poland, the nearest region is Eastern Europe. So, Poland and Sweden stood up with a joint initiative of establishing an Eastern Partnership și specifically for attracting attention to the problems faced by this region, which is an integral part of the European civilization. Europe should not focus, say, on the Mediterranean region only. We have no right to forget that there exists also Eastern Europe și with Moldova, Ukraine, Belarus, Georgia.

Q: How realistic do you think is the possibility of Moldovas acquiring the right of citizens free movement to and in the European Union area already by late 2012, as the new Moldovan authorities are expecting?

A: Chisinau should realize that acquiring of the right to free traveling in the European Union depends not so much on negotiations but, rather, on the republics own achievements, on the Moldovan political elite, on the efficiency of Moldovan border and customs authorities, and și in the long run și on every citizen of Moldova going to Europe. By 98%, the success of Moldovas striving for European integration depends exactly on the Republic of Moldova itself. Integration requirements have been formulated very clearly, and the Moldovan Government knows what Europe is waiting from it. The problem is, the Moldovan state is, so far, not able to provide its citizens with information about what in fact Moldova is supposed to do. And we are here, inter alia, for supporting Moldova in this process.

Q: Poland was among the first partners of Moldovas to have responded to the Governments request for financial assistance, and Warsaw decided to furnish a US$15 million credit for budget deficit covering. How would you explain such a quick reaction?

A: If the Moldovan authorities had not expressed this request and had not addressed different partners, we would perhaps never learn that such a problem did exist. But as the Filat Government had entered into negotiations with several partners, we tried to be as responsive and fast as we only could. Poland is not the richest nation, either, but we found a possibility to help Moldova with the credit. We felt it was our duty to help because we remember very well the early 1990s, when Poland embarked on a hard path of political reforms, when our domestic situation was even harder than in Moldova now, and when Poland received help from foreign donors. That was precisely why we have managed to achieve an economic success.

Without serious reforms in the real economy sector, without market liberalization and without liquidation of monopolies, the Moldovan economy will be unable to develop, either. These are complicated-most processes requiring gigantic patience.

Q: What are the credit terms going to be?

A: I am convinced they will be favorable. It is going to be a quick credit on advantageous terms. The means are expected to come to the Moldovan Government before the end of 2009. Certainly, a quick credit should presuppose a short maturity period as well. The credit should be payable within a year. The Moldovan authorities discussed the terms of such a credit with IMF representatives. According to this agreement, Moldova has fairly restricted borrowing possibilities. Somebody has to control things to prevent the current governance from committing too many mistakes. The governments of countries in a hard situation tend to borrow too much, thus putting a very heavy tax burden on the countrys future. The IMFs and other partners recommendations are as follows: Moldova can indeed take loans, but should not exceed its repayment capacity.

Q: Do you know your successors name?

Infotag: Thank you very much for the interview, Your Excellency. Its full text will be published in the December issue of the Banking and Finance magazine.

On Wednesday, Moldovas Acting President, Parliament Chairman Mihai Ghimpu decorated Ambassador Krzysztof Suprowicz with Ordinul de Onoare [Order of Honor] for his contribution to the development of the Moldo-Polish relations.