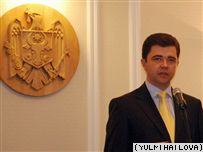 1. The current state of the Transnistrian conflict settlement process

Corneliu RUSNAC, moderator, IMEDIA: In what condition is the settlement process now?

Victor Osipov, deputy prime-minister in charge of reintegration: There is an effort by the new Government of the Republic of Moldova, supported by our partners for dialogue and I would like to think that it is also accepted and understood by those from Tiraspol, in order to unlock the dialogue on this issue.

I think, and I have said this, a success of the current government is that it managed to assert itself as a credible discussion partner, was able to articulate the new approach, more open and more positive, as regards relations with Tiraspol and addressing the issues that are on the countrys reintegration agenda. Thus, conditions were created for a whole series of meetings and actions in the 5+2 – in Vienna, here in Chisinau, visit of mediators and observers, leaving together for Tiraspol, where we can say that there was also an informal 5+2 meeting. There was also a seminar organized to enhance confidence among the institutions defending the rule of law on the right and the left bank, an unprecedented action but also one of great opportunities. These signs are showing that there is a worming at least in what regards the settlement process.

I should remind you that we agreed on November 6 in Vienna that we will resume bilateral dialogue to resolve current problems in the region and create a platform for development projects, including those funded from outside – the EU and other donors, also all parties have shown the readiness to resume political negotiations in the 5+2 format, difficulties still remaining in terms of determining the date and, especially, the contents of a first round of the resumed process.

There were also a series of consultations at the meeting of OSCE foreign ministers in Athens on 1-2 of December, where the subjects on the agenda were also discussed and, although there was not a declaration on Moldova — which is not a novelty, they have not managed to get one in previous years either – I think however that the talks have advanced. And I also think that the parties have shown enough common points of view, enough similar positions, despite retaining some differences which made it impossible to coordinate a text for the ministerial meeting within such a limited timescale.

Here is the situation. But most importantly I think it should be noted that following these agreements bilateral dialogue between Chisinau and Tiraspol was actually resumed. I have already had a first working meeting, without any publicity, with the political representative of Tiraspol, where we discussed current issues affecting the interests of economic agents on both banks, public interests, the interests of peasants on the plateau near Dubasari who have difficulties of accessing to their land beyond the Rybnitsa-Tiraspol route and many others – problems with movement of diplomats, and concerning the general freedom of movement of people and so on. We have already started a discussion in this regard, we are in the phase of finding solutions to problems that have been raised during the first meeting, and even try to schedule a second one. So we are trying to give this dialogue pace and content.

In this context, I repeat, we think our positive openness is perceived adequately by Tiraspol representatives and supported by the participants in the political settlement process.

Corneliu RUSNAC: How do you and the Alliance for European Integration envisage the settlement of the Transnistrian conflict? Based on which principles should this problem be settled? Is there any difference of principle regarding the way how the settlement of this crisis was perceived by the former authorities?

Victor Osipov: I do not think that the basic principles make the difference. They are the same. And perhaps one of the most precious things that Republic of Moldovas authorities were able to defend with the support of our international allies, was maintaining the status quo in which Republic of Moldova is recognized as a sovereign, independent and territorially integral state within its internationally borders recognized. This was also reconfirmed at the October meeting in the 3+2 format of mediators and observers to the process and subsequently in a bilateral manner by all our partners. It is a principle within which we see the solution of the Transnistrian conflict. And the form, which is also expressed by rather broad formula and liberal in terms of content, as a form we see the expression of this solution by granting special autonomy status to the Transnistrian region. So even here there is no difference.

Moreover, I want to tell you that in terms of fundamental principles and strategic interests that Republic of Moldova has in this matter, one of our tasks was, and I think we managed, to demonstrate consistency. Because what a national strategy in a priority issue really means, is to demonstrate consistency. But novelty is that we try to approach the process differently. We try to address communication differently and try to address requests in a different way, including those coming from the Transnistrian side, in order to solve problems that they consider to affect their interests, negotiating in this framework other possible issues which affect our interests.

I think the so-called positive pressure is much better than the roughness they had before in their discussions – a manner which often led to a deadlock in the talks even in actual meetings, and we will not repeat this mistake.

I also think that a number of positions that are not related to issues of principle, but to rather more technical issues, need a new approach. And what we tried to do during this period, assuming the file of Transnistrian settlement, was to assess which of the mechanisms have not worked and should be changed or must be applied in a different manner.

3. Withdrawal of Russian troops and munitions from the territory of Republic of Moldova

Victor Osipov: I would recommend those discussing the issue to be more nuanced and accurate. We should not create the impression, false in fact, that since Istanbul Summit of 1999 onwards things have not moved on this issue. It is false. We must view the situation in its real dynamics and find that the contingent of Russian troops from Transnistria is currently reduced to a total of one thousand soldiers and all heavy weapons have been discharged or discarded on site. Of the total arsenal of Russian ammunition from Republic of Moldova’s eastern districts, amounting to over 40 thousand tons, nearly half have already been evacuated. Out of the peacekeeping contingent, which originally numbered 2,500 Russian soldiers, today remained around 500, after an agreement made by parties in Odessa, but virtually a unilateral decision of the Russian Federation. I prefer to address and present the situation in terms of the positive dynamics that it recorded.

Similarly, we cannot deny that these processes stopped at some point. And we have yet to see the reasons why and who bears responsibility for this. I believe that each party bears some – Transnistrian, Moldovan, and the Russian one.

Our task, set in the work schedule of the Government, is very ambitious and yet very natural. When we talk about a peace mission, its aim is peace. Fortunately, for 17 years the situation is stable in Transnistria and in the Security Area, and we believe that in the end – and it would be better to happen sooner – the military component of peace mechanism should be replaced with a civilian monitoring mission under international auspices, possibly under the aegis of the OSCE.

But such a transformation can only be agreed by parties who are involved in the peacekeeping mission, and the settlement process. This is not easy and we will not benefit if we just point at the Russians and present in the form of blame what is actually a common goal and should be an achievement for the Russian Federation – evidence of successfully completing a peace mission, unlike in other conflict regions.

I think we should resume the positive dynamics and keep on trying to persuade those who are the owners of the troops and ammunition to continue until their final disposal. It will not be very easy, but I think we have chances.

4. The role of EU and the U.S. in resolving the Transnistrian crisis

Victor Osipov: European Union and the United States are already involved and bring a significant contribution to the discussion of topics that are on the agenda of meetings. They participate equally, although they are only observers. The difference is that, unlike mediators, observers have no voting rights on documents. But discussions in the format is not the only way they can help in resolution of the Transnistrian conflict and the EU and the U.S. have a determination that we see growing to engage more seriously, in particular in development projects that should bridge the two banks. By engaging in joint activities, by solving problems facing the people, by providing technical and financial assistance in solving problems of infrastructure, health care, the establishment of cultural bridges and so on.

I think there are many other instruments outside the actual settlement policy or political negotiation and through them we must insist, as we indicated in the government program, that the role of EU and the U.S. in this process is increases.