Home Interviews Interview with Victor Chirila: Development of foreign relations will depend on internal... 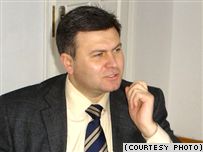 Info-Prim-Neo: How was 2009 for Moldova in its relations with the Western partners, the neighbors and Russia?

Victor Chirila: The general conclusion is that it was a difficult year. First of all, because the internal events, in particular the election campaign, were negatively affected by our foreign policy, especially in the first half of 2009. Owing to the political instability, Moldovas relations with the EU were close to becoming frozen. For example, the European officials permanently postponed the talks on the Association Agreement with the EU, until the clarification of the situation. The situation became clearer only after the July 29 early parliamentary elections, when the Democratic parties took power and formed a government coalition. Only after these events, did the EU change its attitude towards our country as the July elections brought to power a new generation of politicians, who aim to bring Moldova as closer to the EU as possible.

In the relations with the neighbors, we can speak about two different stages. The first stage, before July 29, was a tense one. Moldovas relations with Romania and Ukraine went through the most difficult periods in the history of our country. Many bilateral problems have been suspended and this affected the quality of the relations with these states that are very important economic and political partners.

The government installed after the July 29 elections understands how important it is to have good relations with these countries. In the relations with Romania, that discriminatory visa regime for Romanian travelers was lifted. The political dialogue was resumed at different levels. There was signed the Agreement on Small-Scale Border Traffic. Thus, a number of the promises made by the governing Democratic parties during the election campaign were fulfilled.

In the relations with Ukraine, the political dialogue was stepped up at the level of heads of state, Prime Ministers and, especially, Foreign Ministries. New opportunities appeared as regards the demarcation of the border between Moldova and Ukraine, especially on the Transnistrian segment. The EU is ready to participate in this process through its EUBAM mission.

In the relations with Russia, the foundation was laid for a coherent political dialogue between Chisinau and Moscow. I think the discussions held by Moldovas Prime Minister Vlad Filat with his Russian counterpart Vladimir Putin last autumn created preconditions for a stable, sincere and predictable dialogue between Moldova and Russia. However, there are yet many problems. It wont be easy to build a relationship based on trust and mutual respect with Moscow. There are many internal subjects that can upset our dialogue with Moscow. I mean the subject of neutrality, the Transnistrian conflict, the partnership with NATO, the improvement of the relations with Romania, the activism of certain Moldovan political leaders, who create a kind of political agiotage around such false problems as the persecution of the Russian mass media, the undermining of the status of the Russian language or violation of the rights of the Russian-speaking minorities and others. We saw how Russia reacts when its false friends from Chisinau inform it about such problems.

Info-Prim-Neo: In 2009, the experts said Moldova should not â€˜miss the train and should profit from the Swedish presidency of the EU as Spain, which took over the presidency on January 1, 2010, is less interested in the Eastern area that includes Moldova. How will the relations between Moldova and the new presidency of the EU develop in 2010?

Victor Chirila: The Swedish train wasnt missed and this was due to the changes that came after July 29. Moldova obtained an assurance from the EU that the talks on the Association Agreement will be opened this month and Brussels consent to initiate negotiations in 2010 on the liberalization of the visa regime and on the future agreement on the creation of an extensive free trade zone with the EU. Besides, the European Commission promised over 100 million euros in financial assistance to Moldova to overcome the economic crisis, but only after it signs a financing agreement with the IMF.

Meanwhile, the Government decided to open an Embassy in the Spanish capital of Madrid. It was a correct decision. It had probably to be taken by the previous government, much earlier. We hope the team that will go to Madrid will cope with the logistic problems related to the opening of the Embassy and with the diplomatic tasks, including ensuring a stable and efficient dialogue with Madrid.

Info-Prim-Neo: How will the relations with other partners develop in 2010?

Victor Chirila: Preconditions were created in the second half of last year to make changes in the relations with most of our partners this year. But this does no mean that it will definitely happen. It depends on the internal situation.

The development of the negotiations and the quality of the dialogue with the EU and the U.S. will depend on the reforms that the Moldovan authorities pledged to implement.

Premier Vlad Filats visit to Washington set to take place this month has another aim than to sign the Compact agreement with the Millennium Challenge Corporation. The major aim of the visit is to transmit the message that Moldova wants another type of relations with the U.S., based on strategic partnership.

It wouldnt be easy to achieve this desideratum for a number of reasons. First of all, Moldova does not have a strategic value for the U.S. as it is a small country that does not have natural resources vital for any economy (oil and gas) and is not located in a geographic zone important to the United States. But this does not mean that the U.S. is not interested in the political events and developments in Moldova. On the contrary, it wants that our country and the region where it is situated promote democratic values and enjoy political and economic stability. Therefore, the U.S. will assist the Government of Moldova in achieving the objectives that coincide with those of the U.S. Government.

We should not expect that the strategic partnership will appear immediately after Vlad Filats visit to Washington. It will be established only if it is based on a common view that will represent a synergy of Moldovas interests and the interests of the United States in our region. Such an opinion was expressed by the U.S. Vice President Joe Biden during his visit to Bucharest in 2009. He said that the U.S. will help Moldova implement reforms that will bring it closer to the Euro-Atlantic world. It was a very clear message.

In the relations with Russia, there are many subjective problems that can have a negative impact. A lot depends on the dialogue that the Moldovan authorities will continue with the Russian ones and on how correctly the Russian authorities will be informed about the realities and events in Moldova. We should not yet neglect Russias plans in our country, which are not always clear. If early elections take place in Moldova, Russia will be tempted to support certain forces to the detriment of others. Such a game can destabilize the fragile political situation in Chisinau. Nothing is certain in the relations with Russia. Certain factors can either ensure a coherent dialogue or destabilize it.

I think 2010 will be a productive year for our cooperation with Romania. Until the Alliance for European Integration exists and there are no problems inside it, the relations with Romania will develop steadily. I think we will be able to solve two important problems și sign the European partnership agreement with Romania that will reflect the essence of our historical, ethnical, political, economic and cultural relations, and the Border Treaty, which must be purely technical, not political.

In the relations with Ukraine, I think the situation will become clearer after the presidential elections that will take place in the neighboring country this month. No matter who wins them, the European integration will remain a priority for Ukraine. The official Kiev wants to sign an Association Agreement as soon as possible and liberalize the visa regime with the EU and this favorable conjuncture must be used by the official Chisinau to find compromise solutions to problems concerning the demarcation of the Moldovan-Ukrainian border on the Transnistrian segment, involving the EU to a greater extent. The EUs assistance will be fructified fully only if the Moldovan and Ukrainian authorities show political will to solve the existing bilateral problems.