Catherine Ashton, High Representative of the Union for Foreign Affairs and Security Policy and
Commissioner Å tefan FÃ¼le made today the following statement:
Commenting on the no-confidence motion passed this morning by a majority of Members of the
Moldovan Parliament against the Government of the Republic of Moldova, the spokespersons of
Catherine Ashton, High Representative of the European Union for Foreign Affairs and Security
Policy and Vice-President of the Commission, and Å tefan FÃ¼le, EU Commissioner for Enlargement
and European (eighbourhood Policy, made today the following remarks:
"We take note of today’s no-confidence vote of the Parliament of the Republic of Moldova and the
dismissal of the Moldovan Government that ensues. This vote takes place as Moldova has made
substantial progress in its visa liberalisation process and the completion of ambitious negotiations on
an EU-Moldova Association Agreement is within sight.
We call on all the political groups and non-affiliated Members of the Moldovan Parliament to engage
in genuine political dialogue without delay, with a view to achieving a strong and stable majority
committed to promoting democratic values and the rule of law as well as pursuing the path towards
political association and economic integration with the EU, for the benefit of the citizens of the
Republic of Moldova.” 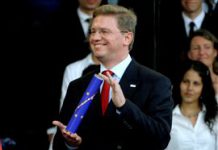