Home Opinions & Comments Moldova’s reunification will be possible only by broad compromise, declaration 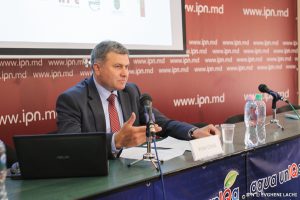 The Transnistrian conflict will be settled only if a broad compromise is found among all the participants in the negotiation process in the 5+2 format, including Russia. Chisinau and Tiraspol will be unable to reach a compromise themselves, Victor Chirila, executive director of the Foreign Policy Association (APE), said in an APE press club meeting, where there was presented the report “Transnistrian Settlement in an Impasse”, IPN reports.

Victor Chirila said the small steps policy launched earlier by the constitutional authorities failed and the compromise area between Chisinau and Tiraspol became dangerously narrower. The Transnistrian administration promotes the idea of normalizing the relations with Chisinau by the international recognition of the region’s independence.  But this solution is unacceptable to the constitutional authorities, which are ready to offer a special political and legal status to the region instead.

The expert noted that meanwhile the geopolitical discrepancy between the two banks of the Nistru River has widened. Chisinau tends towards the European integration, while the Transnistrian region wants to become integrated into the Eurasian Union and tends to adjust its legislation to Russia’s legislation. The right bank of the river failed to become a pole of attraction for the left bank, being confronted by economic problems. Therefore, the country’s reunification is not only impossible now, but is even dangerous and this process should not take place in a hurry.

The APE executive director also said that the players that take part in the talks in the 5 +2 format (Russia, Ukraine, the U.S. and the EU) should be involved in the process of finding a compromise acceptable to both of the sides as Chisinau and Tiraspol will be unable to find a solution without the participation of all the sides.

The press club meeting was organized by the Foreign Policy Association with the support of East Europe Foundation with the resources provided by the Government of Sweden through the Swedish International Development Cooperation Agency (Sida) and the Ministry of Foreign Affairs of Denmark/DANIDA.