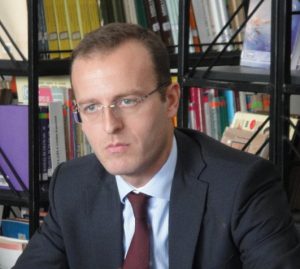 MV: There is a common opinion in Moldova that it very difficult to understand the interests of Russia in the post-Soviet space, that Russia should clearly articulate them. Does Europe understand Russia?

Ð¢homas Gomart: There are different opinions about Russia in Europe, different perceptions of this country. But more and more EU countries tend to believe that Russia should be a partner. Although it will be a difficult partner. Also there is the idea that Russia is one of the main actors of security not only in Europe but throughout the Euro-Atlantic region.

MV: Are there in Europe still state-friends of Russia and the countries that are its irreconcilable opponents and will treat it with caution, regardless of how strong is the partnership between the EU and the RF?

Ð¢homas Gomart: It seems to me that, since 2008, the EU countries have the same attitude towards Russia. , There was markedly critical attitude towards Moscow from the Baltic countries and Poland after the enlargement in 2004. At that time, however, actively developed relations between Russia and France, Germany, Italy. And there is already a unified EU position on collaboration with Russia today. Although there are differences on some issues.

MV: Is the political slogan "with Russia or without Russia" used in European countries during the elections?

Ð¢homas Gomart: To my mind, its not used. For example, in France, where Im from, the foreign policy doesnt play large role during the elections. Here is a European crisis și yes it is, this is the electoral factor. Perhaps for the Baltic countries the choose to be closer to Russia or not, is still significant.

MV: You have been studying the CIS for almost a decade. How do you think, why does not it work a full partnership with Russia in the CIS?

Ð¢homas Gomart: Russia hardly develops integration projects. And the CIS is not the best platform to develop integration policy. The Commonwealth is very weak. Other existing formats of integration also leave the questions open. For example, the Customs Union (CU) comes into antagonism with the WTO. It is difficult to integrate Ukraine into the Union of Belarus, Russia and Kazakhstan, because of the incompatibility of TC with European neighborhood policies, which Russia has never taken into consideration.

MV: In the past the CIS countries had unified space, but in the new political environment have not been able to integrate for the last 20 years. How likely is the success of their European integration taking into account the fact that the EU is significantly ahead of those countries in many areas?

Ð¢homas Gomart: Most of all this process depends on the prevailing situation in Europe. The EU countries are experiencing a very deep economic crisis. The main attention is focused on the fate of European structures and the euro. Still, the Eastern partnership is another very important direction for the EU to work on.

MV: How strong is the energy factor in the questions of partnership with Russia?

Ð¢homas Gomart: The energy factor was, is and will be the main issue in relations between the EU and Russia. At the same time, its a problematic issue. Because, the more the EU speaks to Russia on energy, the higher becomes the concentration of state power in Russia.

Now the primary discourse of dialogue is running out of energy. In September 2009, the President D. Medvedev proposed for the EU the partnership for modernization. It must reduce the Russian economy dependency on orientation for source of raw materials. . Such partnership has to help to develop other areas of Russian economy: scientific, innovation, technological. Russia cannot base its socio-economical development only in the energy sector.

MV: Can you see the process of forming of model for long-term development in Russia , which can be interesting for neighbor countries, and which will not resonate with EU rules?

Ð¢homas Gomart: Russia wants to be seen as the country with great economic potential which can be transformed into political influence. However, it faces significant demographic problems and its economy continues to depend on energy resources. It has set itself the task of modernization, but it is difficult to implement the models based on other resources.

MV: There is a belief that who possesses energy resources can indicate the way to others. Russia has the resources, but no one wants to move on its signs. Why is there such a paradox?

Ð¢homas Gomart: Youre right, its a paradox. The matter is that the green technologies”, based on using alternative energy sources, are actively developing all over the world. Oil and gas remain crucial to the livelihood resources for a decade, but then will fade into the background. This is a great challenge for Russia; it should be ready to change.

Already 15 years Germany is actively investing in the development of alternative energy technologies. China also spares no investments in such development. And more and more countries are following their pattern.Whith every year there will be less need for Russian gas in Europe after 2020 , and Russia has to find the sources of revenue that compensate for inevitable losses.

MV: Maybe you have a recipe for small countries with far fewer resources or none at all? How do you see their ways in the partnership between the EU and Russia?

Ð¢homas Gomart: I think that small countries must find a niche of economic specialization and develop their capabilities in these areas. Their experts in selected areasshould be the best. Then it will be easier to solve the issue of market access, reduce political dependence on the regional leaders. Self-confidence will allow small states to have clear answers to the question, of what regional area they are located and what kind of relationship with their neighbors they may have. Moldova, in particular, can interact with both the EU and Russia. There are no obstacles in this way for Moldova.