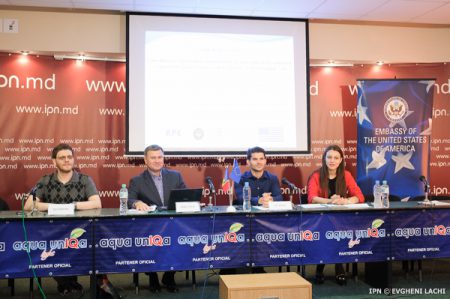 The Foreign Policy Association (APE), in partnership with the Council for the Prevention and Elimination of Discrimination and Gender Equality, aims to assist the employees of the Ministry of the Interior and its subdivisions to implement the standards stipulated in the Law on Equality of Chances. Within an assistance project, the APE and the Council started to organize seminars in a number of districts of the country in a move to help the Ministry’s employees to improve their capacities to prevent and eliminate discrimination and ensure equality.

Foreign Policy Association executive director Victor Chirila, in an APE press club meeting at IPN, said civil society should play an important role in putting into practice crucial laws for our country, many of which are adopted in Parliament, but are not implemented or are implemented superficially. “Today we speak about the Law on Equality of Chances, which was passed in 2012 following very heated discussions that were mainly superficial. Particular social and political forces resorted to manipulation and exaggerations, but this law that is important for our country was ultimately adopted. Now we speak about the implementation of this law, which should bring qualitative changes both at the central and local public institutions and in the mentality and behavior of society,” stated Victor Chirila.

APE expert Ion Schidu said the participants in the seminars that were held until now showed an increased interest in legal aspects, methods of avoiding discrimination and details about the forms of discrimination and the risk groups. The employees of the Ministry of the Interior are those who must implement this law, but these also want to know more about it, including from the position of beneficiaries of its provisions.

Yan Feldman, of the Council for the Prevention and Elimination of Discrimination and Gender Equality, said they earlier staged seminars and training courses in preventing and eliminating discrimination for members of district councils, employees of district council subdivisions, district and village mayor’s offices and for representatives of civil society and the mass media from district centers. “The law provides that we must prevent discrimination, formulate policies and promote equality in the Republic of Moldova,” he stated.

The project is implemented thanks to a grant provided by the U.S. Department of State.