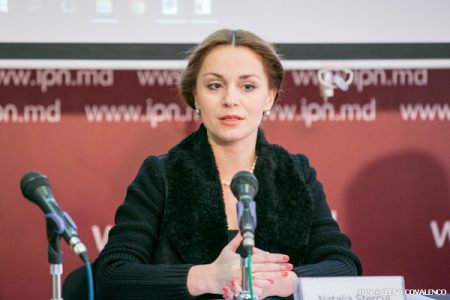 The Transnistrian problem can be regarded as the component of a strategy of the Russian Federation, which is aimed at keeping the Russian influence in the region, with the possibility of influencing foreign policy, said Natalia Stercul, programs director at the Foreign Policy Association (APE), who carried out a study of the Moldovan-Russian relations in the context of the new geopolitical and Eastern neighborhood realities, IPN reports.

In a press club meeting held by the APE, Natalia Stercul said the sides cannot reach a consensus as to the withdrawal of the Russian troops from the Transnistrian region. The Moldovan administration should focus on the development of a clear position in the process, which would be promoted by all the state institutions. This way, preconditions will be created for reviewing the approach to the problem at international level.

The APE programs director noted that the Russian Federation repeatedly announced that the Russian troops will not leave the Transnistrian region, making reference to the munitions kept in Colbasna and invoking mainly the “historical memory”. These arguments are also used to explain the Russian side’s skeptical views about the change of the format of the peacekeeping mission in the region. Moreover, the given arguments are strengthened by concerns about the worsening of the conflict following the appearance of a new source of tension in Southeastern Europe.

As regards the agreements reached by Chisinau and Tiraspol last yearend, Natalia Stercul said the opening of the bridge between Gura-Bicului and Bychok is an important step in the Transnistrian conflict settlement process that will bring about good changes for the local population and will positively affect the development of the whole region.