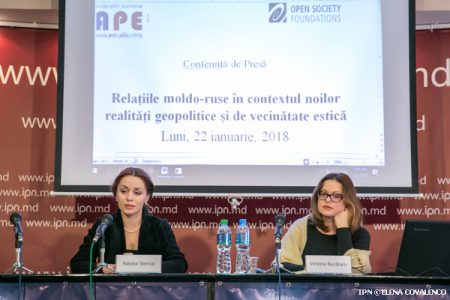 The experience of the Moldovan-Russian cooperation during many years, the good results in different areas and the multitude of mutually advantageous actions are not fully used by the two states. The renewal of the bilateral dialogue should be based namely on these postulates and should involve a respectful attitude to Moldova’s external development course. The development of a new format of the Moldovan-Russian cooperation will be possible specifically in such conditions. These are the conclusions of a study of the Moldovan-Russian relations in the context of the new geopolitical and eastern neighborhood realities that was conducted by the Foreign Policy Association (APE).

Study author Natalia Stercul, APE programs director, in a press club meeting at IPN said the problematic areas related to the closing of positions on the fundamental aspects of the Moldovan-Russian relations need to be reviewed. A basis for political confidence should be developed, which would be the key to the success of the subsequent cooperation. Ambiguity, political opportunism and instigation in the political relations between the two states should be avoided. This will take the relationship between Moldova and Russia to a new qualitative level and will contribute to establishing a solid basis for the renewed cooperation platform.

The expert noted it is not the case for the economic instruments to be used by the political factor as counteractions. It is important to concentrate on the common pragmatic economic interests. The new format of commercial and economic cooperation should take into account the European aspirations of the Republic of Moldova. The economic aspect of the cooperation between the two states remains rather wide and there is place for developing new commercial directions.

APE executive director Victoria Bucataru said the relationship between Moldova and the Russian Federation is important both in terms of internal policy and of foreign policy. The Foreign Policy Association aimed to reveal the problems, opportunities and solutions existing in the partnership relations.