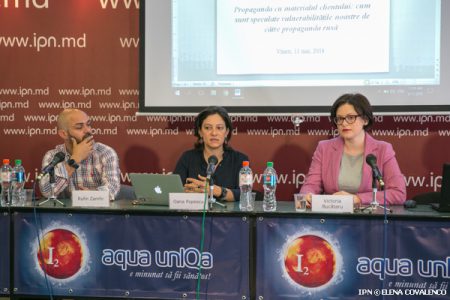 The permeability of external influences in the Republic of Moldova is at a high level and can evolve into a crisis. Compared with Romania, Bulgaria and Georgia, Moldova has a score of 2.08 on a scale of 0 to 3, where 0 means least permeable to external influence and 3 means most permeable.

The situation in the four states was analyzed as part of a study entitled “Propaganda with the client’s material: how are our vulnerabilities to Russian propaganda speculated”. The research was conducted by the Global Focus Center Romania and was presented in a press club meetingheld by the Foreign Policy Association (APE) at IPN.

Global Focus Center Romania executive director Oana Popescu said the four states have a score higher than 1.5. “We all have scores higher than 1.5 and this means that we are in a dangerous zone. Starting with Romania, which has 1.52 and has the best position among the four states, and ending regrettably with the Republic of Moldova, which is the only one that exceeds the ceiling of 2 that marks the difference between a relatively high permeability situation and a high a permeability situation,” noted Oana Popescu.

Rufin Zamfir, program director at the Global Focus Center Romania, said it is about the concept of an index for measuring the vulnerability of a state to propaganda and influence. This index is based on the scores obtained inside questionnaires that were distributed to over 160 Moldovan experts. The chosen analysis areas are: economy, society, internal policy and external and security policy.

“The graphic starts with Romania and ends with the Republic of Moldova, which unfortunately has the highest permeability level, of 2.08. 2.08 is beyond the ceiling defined by sociologists as the crisis ceiling. 2 is the crisis ceiling and any score higher than 2 shows a volatile situation that can easily lead to major imbalances in the perception of the reality as it is all about the replacement of the reality with a fabricated reality so that society in general adopts a natural behavior that is not typical of it,” stated Rufin Zamfir.