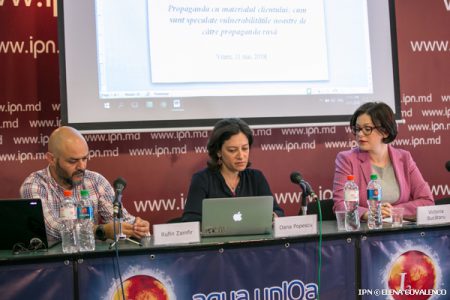 The Republic of Moldova is in a region where the balance between the East and the West and the sometimes unclear foreign policy and security orientations permit again geopolitical games that are mainly staged by Moscow. Such a situation is typical not only for the Republic of Moldova, but also for Romania, Bulgaria and Georgia, all the four states being featured in a study conducted by Global Focus Center Romania, whose results were presented in a press club meeting held by the Foreign Policy Association (APE) at IPN.

APE executive director Victoria Bucataru said the research includes a quantitative and qualitative analysis of the permeability in the Republic of Moldova and other states of propaganda, misinformation, manipulation and other forms of illicit influence that endanger the statehood and integrity.

Global Focus Center Romania executive director Oana Popescu said the study is a comparative analysis of what makes the four states in the region vulnerable to propaganda, both foreign (primarily from the Russian Federation) and internal one. There were chosen EU member states, NATO members or not, states that have a Russian minority or frozen conflicts on their territory.

Oana Popescu said the four states have a lot in common, such as important social divisions, including Romania, which, since 1989 until now, rose eight times from economic viewpoint, but this growth affected the living standards of only half of the population. Corruption is a joint problem that enables, besides propagandistic messages, subversion and direct influence on the economy and on politics, through the agency of the economy.

“We all have a recent democracy story and, respectively, still fragile democracies, political systems that enable parties with authoritarian tendencies to hold power. We have a political agenda that is non-representative for the public agenda. The political parties are encouraged to invest in their main voters and to remain in power rather than to effectively represent the public,” noted Oana Popescu.

According to her, what detaches Moldova from this platoon is the yet high economic dependence on the Russian Federation. Bulgaria has a relatively similar problem, but with the advantage that it is an EU and NATO member, being held in particular limits. The state is also quasi-captured by corrupt countries with political-economic influence with roots that go up to Moscow. There is also the social fragmentation in the Republic of Moldova.

Unlike the three states, the Russian language is widely used in Moldova and, against insufficiently developed local press that is captive to corrupt interests, the population is exposed to a flow of information that comes directly from the Russian Federation.

The press club meeting is supported financially by the Open Society Foundations.