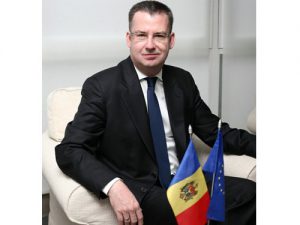 2010 was your first full year in Moldova. Do you think your destiny was generous with you or tough for you as a diplomat when it threw you into a small and underdeveloped country like this one? For sure your rÃ©sumÃ© could have gained much more if you were deployed with a diplomatic mission in a country like France, Russia, or the United States, which are very important for the European and global processes.

Dirk Schuebel: I think that the destiny has been very kind to me. First of all, I received an ambassador post, or more exactly, the post of a head of delegation. And, as you can imagine, there is a lot of competition for such a post. Secondly, I’ve got a post in a very interesting place, in which during the last year, or since my arrival, something interesting has happened every day. It is a country in which we are trying together to shape a new, modern Moldova, with a European form, and I am very proud of having lived here for fourteen months, being able to contribute a little bit to its recent development.

IPN: We understand that this is what you want to obtain from Moldova. But what did you get to understand about Moldova and its people over this period since you are here? What sort of people are the Moldovans, in your opinion?

Dirk Schuebel: I think the Moldovans are extremely generous, nice, and hospitable people, which I have learned of beyond my official contacts. That is why I’m feeling very glad to live in this country and to experience the Moldovan hospitality on an everyday basis. Apart from this, I have learned that the Moldovan population has a strong wish to improve their lives and the state of affairs in the country: they want political and economic stability. And I very much hope that during the last year I have been able to contribute to this and that I will be able to contribute even further to this process of stabilization.

IPN: As a Moldovan, I’m flattered by this description of the Moldovans that you gave. But at the same time, being an older” Moldovan, I also have some reserves about the way of life of my people, so now I’m trying to look at them through your eyes. Why do you think the Moldovans celebrate both secular and religious holidays, both according to the new and the old calendars, both the Soviet” and the democratic” ones?

Dirk Schuebel: First of all, we should not create new artificial situations. These holidays have been celebrated during many years during the time of the Soviet Union and I don’t see any reason why these holidays should be canceled just for this very reason. If it makes people happy, why not? Moreover, I don’t think that many Moldovans relate the celebration of these old holidays to the Soviet times, they just relate it to quality time with family. At the same time, I think it is also very good that Moldova looks forward, looks to the future, and celebrates our holidays, too. If you have the chance to celebrate twice, I have full understanding for this.

IPN: In the same context, the way you perceive the Moldovans. Dimitrie Cantemir, a great scholar and a prince of Moldavia, said the Moldovans are not really into books”. Do you think something has changed since those times?

Dirk Schuebel: I’m afraid I cannot agree with what Prince Cantemir found many years ago. I have got to know the Moldovan population as extremely keen on learning new things. Sometimes I even have had the impression they are too fast, trying to make the second step before making the first. This also goes for the Government that has governed this country during my stay here: we have worked very closely during this period and I have had the impression that the Government, but also the people are very eager to learn new things. Some of them must have been too new to them, which not always had a positive impact in the current situation, but which were directed to the future and will improve the lives of the Moldovan population in the medium and long term.

IPN: Once again, thank you. The Moldovans have earned a reputation for being good workers and reliable people in Europa, where they have massively migrated over the recent years seeking a better life. From this point of view, they have sort of chosen the life style they prefer, an European one. At the same time it appears that the Moldovans, as a whole, are not yet very decided about transforming their country into an European one, judging by how the Moldovans have voted in all these years since independence: roughly 50 to 50. Can you explain this?

Dirk Schuebel: I can give you an example of my own past. As you probably know, I’m from the former East Germany and many people who lived there, including my parents, were afraid of this unknown future in the so-called West, the United Germany, at that time. In East Germany, under the Communist times, they knew what they had; they did not have very much, but they knew what they had. Wheres the West might have brought new opportunities, it was not sure if they would be able to use them. Some days ago I read an interview with a leading member of the Left (Die Linke) Party, who always have been strictly against the unification. And suddenly he declares he must admit that the unification was the best thing that could happen to this country, even though he still didn’t agree with the way it was carried out. I think the same applies to the Moldovan population. Many are afraid that they might not be able to cope with the competition which they believe is so high in the so-called West. But I hope that time will show that what the EU can offer is an example worthwhile following, because it does improve the average situation of every single citizen of the country.

Dirk Schuebel: As I said before, in my view Moldovans are very friendly, very hospitable, and very ready to start moving things, ready to act. I like this attitude, because this is exactly the way how Moldova can be brought forward, when all people are really willing to improve not only their personal situation, but the situation of the entire country. As you will understand, I would not like to enter too much into the second part of your question, but I can tell you two issues where things can be improved in Moldova in general. The first is the situation of the roads and infrastructure, and the second is the driving habits of marshrutka (passenger minibus și IPN) drivers in central Chisinau, who I think could use some additional driving lessons.

IPN: They say that each nation gets the leadership it deserves. How true is that, in particular in relation to the Moldovans?

Dirk Schuebel: I know the saying, but I would not agree in all circumstances with it. There are many options, if we are talking at this moment, on what government (Moldova) can get. However, I think that the Moldovan population has made a very good choice, deciding to vote for the big parties and leaving the decision to these parties to create a stable, functioning government that can indeed contribute to creating political and economic stability. In this case, I think the Moldovan population has taken a wise choice, for which I would like to congratulate them.

IPN: As we are having this interview, reports have appeared that the long-negotiated center-right coalition government is practically formed. How would you comment on such an eventuality?

Dirk Schuebel: Well, I can only talk about the time that I have spent in Moldova, which is about fourteen months, and during this time I can state that we have worked very well with the Alliance for European Integration on a bilateral level, meaning the relationship between the European Union and Moldova. At the same time, I am aware that there were frictions inside the Alliance, but our overall relations have been excellent, and Moldova has been put on the EU agenda in a way it has never been before. A meeting like that of the Friends of Moldova Group on the 30th of September, where ten EU foreign ministers came to visit Moldova at the same time, is unprecedented and probably will remain unprecedented. Should this provisional information that you have received turns out to be true, I will personally look forward, and so will probably the European Union and its member states, to continuing our intensive cooperation. We have many plans and we can tackle them as quickly as possible. However, having said this, I think it is very important to constructively work also with the opposition, if the Communists’ Party should be the opposition, and perhaps even to offer a few important posts to them. Because what this country really needs is to reunite and close those gaps in order to reach out to the entire population, and not only to parts of it.

IPN: What do you think about the negotiation process on this coalition, which many Moldovans found to be far too protracted and nerve-tickling? Was it worth, could it have taken less time?

Dirk Schuebel: Future will show whether it was worth negotiating so long. I hope the result will be equally good, considering the length of the negotiations. On the other hand, I think it is quite normal that if one party has different options that party should look what is best for it, but also for the people. In general terms, if I may add one critical remark, what I was missing during the last four or five weeks since the elections took place is more discussion on the content of the foreign policy, domestic policy, economic policy, and what different parties have to offer. Instead, I have heard many formulas like seven-five-four or fifty-fifty, which only refer to the distribution of posts of ministers and of institutions, instead of thinking about the future of the country, which should be much more important.

IPN: In conclusion, what do you think the Moldovans should expect in 2011 and in the next, say, 10 years?

Dirk Schuebel: I’m not of course a fortune-teller and it would be very difficult for me to say what will happen in 10 years, but for 2011 I very much hope that with the new government the country will finally achieve political and economic that it needs so urgently. And I also hope that, apart from the required local elections, there won’t be another preterm parliamentary election. For the medium term, I very much hope that we will continue our very intensive cooperation that we have started over the last one and a half year. The EU is ready to help Moldova come on an European path and tackle the economic integration process into the EU and the political association process with the EU.

Let me conclude by wishing all the readers of your publication a very prosperous, successful, and healthy year 2011! May all your wishes come true! And let me assure you that the Delegation of the European Union to Moldova and myself are at every citizen’s disposal.