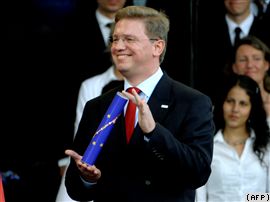 May I begin by thanking the organisers of this Forum for their invitation. It is a great honour and a pleasure for me to contribute a few of my own thoughts to your discussions about the Republic of Moldova and the European Union-Moldova relationship.

A few years ago, this would have been easy to deal with; today, it would require several hours to exhaust the topic. As an expression of our ever stronger relations, and after the highly successful visit of Chancellor Merkel last August, President Barroso is also planning to visit Moldova before the end of the year. Let me therefore focus on a few essential things. And above all, let us be clear that it is performance that matters – not the countrys size or the political colour of its government.

Over the last years, we have witnessed unprecedented consistency and speed of reforms, some truly challenging by their cost or their long-term transformative impact on Moldovas society. When it is implemented, our Association Agreement will induce an even fuller reform agenda for Moldova, and the best prospect for Moldovan citizens to be assured of a future based on the European values and standards. It will also boost our cooperation in foreign and security policy, help on regional issues and promote contacts between our citizens in numerous fields.

Of course, active and ambitious reforms are not easy to drive. They can be met by resistance to change in certain constituencies, and can fall short of being as comprehensive as they should be. It is the European Unions role, as Moldovas friend, to keep recalling the need to be stronger on social issues, bolder on improving the economic and investment climate, and more inclusive in the way reforms are prepared and implemented. These are objectives for the near future. It is also the European Unions responsibility to be coherent and deliver on its commitments when the agreed conditions have been met, without holding up delivery. In particular, I count on Germany, which is hosting todays invaluable event, to fully support the further unfolding of the visa liberalisation process, now that Moldova has met the required benchmarks.

At the same time, the European Union-Moldova relationship is deeply transforming Moldovan society, and for good. More and more, our shared European values permeate the fabric of every Moldovan citizens thoughts and life. The adoption of the law against discrimination is an unprecedented breakthrough in the Eastern Partnership region. Another example is the recent but resolute decision to eradicate corruption and fight impunity.

I am proud that the European Union is able to contribute to these transformations. For the first time ever this year, our assistance will far exceed the symbolic threshold of â‚¬100 million. Together with the Eastern Partnership Integration and Cooperation programme and macro-financial assistance disbursed last April, it will represent â‚¬152 million – â‚¬41 per capita! This is an unseen level of support, and certainly the highest in the European Neighbourhood.

As Moldova comes closer every day to the European Union, I have a dream of a Republic of Moldova, prosperous, loyal to our values, consolidated, modernised, and re-integrated into the European family. But it is more than a dream. It is a real prospect, solidly grounded in hard work and in pro-active diplomacy, which makes the European Union-Moldova relationship a solid, reliable, efficient and beneficial partnership. I want to praise Moldova, its government and its citizens, for their remarkable commitment to our joint initiatives și be they in the area of trade, visas, or political dialogue and coordination.

The European Union has to be ambitious. Very soon, it will not be enough to give only financial support to the on-going transformations. The European Union should anticipate their outcome and set itself up to work with Moldova to turn this dream into reality.

Moldova deserves continuous support to deliver on its commitments, and it is my conviction that it deserves an ambitious future. I’m talking here about the most powerful foreign policy instrument of the European Union and the expression of its ultimate transformative power – the perspective for a country to accede.

It may well be a historic challenge. What we need is goodwill backed by a well-balanced sense of self-interest. Our current negotiations show how similar the European Union and Moldova are in that respect. Can I therefore conclude with a reference to the Treaty on the European Union, whose Article 49 shows us the way forward: Any European State which respects the European values and is committed to promoting them may apply to become a member of the Union.”

Thank you for your attention.