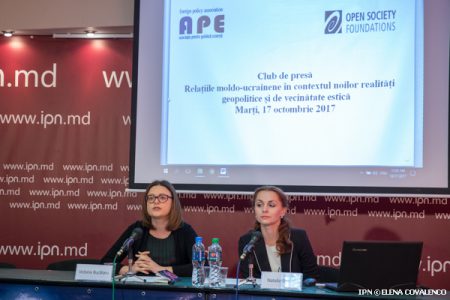 Even if the relations between Moldova and Ukraine have intensified at governmental level, they stagnate yet at presidential level. This is also due to the statements made by President Igor Dodon in the campaign prior to the presidential elections, concerning the annexation of Crimea and the place of this territory and his duplicitous statements about Moldova’s foreign policy course. Such conclusions were formulated in a press club meeting held by the Foreign Policy Association (APE) at IPN.

APE programs director Natalia Stercul said that after a hiatus of several years, this year the Prime Minister of Ukraine Volodimir Groisman paid a visit to Moldova and signed a number of agreements, including the roadmap for developing the Moldovan-Ukrainian cooperation for 2018. He and his Moldovan counterpart Pavel Filip discussed border demarcation and management, exchange of land between Moldova and Ukraine, development of infrastructure projects and their impact on the environment and the situation of ethnic minorities.

However, similar interaction is not witnessed at presidential level and this is due to a number of factors. “First of all, we can mention here the Moldovan President’s statements from the campaign prior to the presidential elections about the annexation of Crimea and, in general, about the place of this territory. Definitely, the Ukrainian side perceived these statements as lack of respect for the integrity and sovereignty of Ukraine. It is also about the twofaced position and pro-Russian orientation of our President and those statements concerning the annulment of the Association Agreement with the EU and the change of the foreign development course,” stated the APE expert. Natalia Stercul noted that all the statements made by the President were supported by acts during his visit to the Russian Federation. Ukraine wants to get rid of the involvement of the Russian factor.

APE executive director Victoria Bucataru said the President’s relations with the neighboring states derive from the statements he made during the election campaign. “This situation is yet unhappy because the relations with the neighboring states are the most important ones from the position of President. With Ukraine, because, either we want it or not, this is the country that ensures regional security, being that pillar of security that protects us from particular neighbors from Eastern Europe, and with Romania, which is the key ally of the Republic of Moldova on its development path,” stated Victoria Bucataru.

She also said that establishing relations with the close neighbors that ensure Moldova’s security as a state in the Eastern region and with the partners that can contribute to developing the Republic of Moldova from economic and infrastructural viewpoints should be one of the priorities of President Igor Dodon, besides the establishment of relations with the Russian Federation.

According to the representatives of the APE, it is very important for the dialogue between the two sides to be maintained and developed. In such conditions, a strategy and a more advanced strategic partnership are needed and the opportunities should be used so as to develop the region more and this becomes more powerful and represents a credible partner for the Euro-Atlantic development partners.